In recent weeks, President Trump has angered a significant portion of his base with his remarks on gun control. Since his calls to raise the gun-buying age to 21 and confiscate guns without due process, Trump, in an attempt to quell the anger of his base, has called for steep tariffs on aluminum and steel.

While I have covered Trump’s ignorance on trade in the past, the following piece will be a more accessible re-edition that deals with his more recent tweets and statements. In addressing such trade statements, I will dispose of many of the economic myths put forward by the Trump team, demonstrating why protectionism and tariffs are not the way forward for promoting American prosperity and global peace. So without further ado, here are the facts.

Last Thursday, Trump began his assault on free trade by tweeting about the state of American industries:

Our Steel and Aluminum industries (and many others) have been decimated by decades of unfair trade and bad policy with countries from around the world. We must not let our country, companies, and workers be taken advantage of any longer. We want free, fair and SMART TRADE!

Here is why the Donald is wrong. 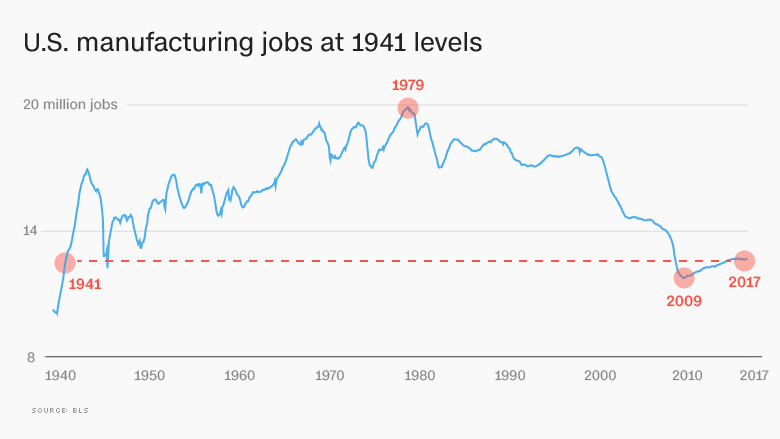 Similarly, American steel is performing well. In 2016, the steel industry boomed due to an increase in car sales. Last year, U.S. steel production rose by 5%, with U.S. Steel going from a $250 million loss in 2016 to a $341 million profit in 2017. Similarly, Nucor Corporation has seen strong increases in net earnings and value, reporting a net profit increase of 65% over 2016, and a stock price increase of $53 over the last 18 years.

American manufacturing is going through the same trend that American agriculture once endured, and for the same reason: technological advancement. 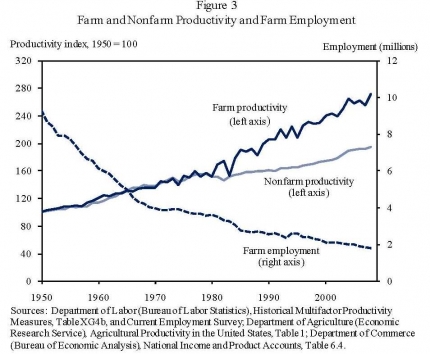 In 1800, 83% of the American labor force was employed in agriculture. By 2008, that figure was less than 2%. And yet, agricultural output is at an all-time high. From robots milking cows to GPS guidance calculating the most energy-efficient way of performing various farm tasks, technology has loosened the burden on the farmer, provided clear environmental benefits, and allowed a growing American population to be fed.

It is true that technology has displaced American workers, just as technology displaced American farmers in the past. But these workers do not remain permanently displaced. On the contrary, we have a social safety net for this very reason. Further, in any dynamic market economy, industries are continuously faced with turmoil to this degree. The agricultural industry endured the storm and is now more productive than ever.

Comparably, the manufacturing industry is already in the storm. One study done by two Ball State University professors found that nearly 87% of the decline in manufacturing employment from 2000 to 2010 resulted from an increase in factory efficiency. No amount of protectionist policy is going to reverse this trend.

Shortly after Trump’s tweet on the supposed decline of American manufacturing, he slammed trade deficits in two tweets:

When a country (USA) is losing many billions of dollars on trade with virtually every country it does business with, trade wars are good, and easy to win. Example, when we are down $100 billion with a certain country and they get cute, don’t trade anymore-we win big. It’s easy!

The United States has an $800 Billion Dollar Yearly Trade Deficit because of our “very stupid” trade deals and policies. Our jobs and wealth are being given to other countries that have taken advantage of us for years. They laugh at what fools our leaders have been. No more!

By now, it’s safe to say that Trump doesn’t understand trade at all. A trade deficit occurs when a country imports more goods than it exports. This does not signal any sort of exploitation of American consumers by foreign nations.

In 2015, America had trade deficits of $69 billion with Japan and $366 billion with China. Neither of these nations sits on their American dollars and laugh at the stupidity of American consumers. Rather, they invest it back into the American economy. The simple fact is, with a popular reserve currency, secure assets, and strong markets, America is a successful investment location. America receives nearly $4.4 trillion in foreign investment every year, and yet no one claims we have been hurt by that.

But I want to get to Trump’s central theme, that in order for someone to win in the marketplace another must lose. The notion could not be more disconnected from reality.

The most disastrous tariff in American history, the Smoot-Hawley Tariff of 1930, taxed over 3,000 imported items with a steep increase on 887 of them. The results were destructive: exports dropped by $4.5 billion by 1932, unemployment increased by 16 percent by 1931, and American car sales plummeted by more than 3.5 million by 1932. More than 40 percent of all banks closed, and real income fell by nearly a third. The enactment of retaliatory tariffs by European nations only worsened the problem. For all of Trump’s talk on winning trade wars, it remains unclear how a contraction in American trade and a steep decline in American prosperity can be considered winning.

Smaller tariffs have been pursued in the decades since the Smoot-Hawley Tariff. In 2002, Bush placed an import tax on steel. With increased steel prices, more workers in steel-consuming industries lost their jobs than the total number of workers in the steel industry.

Similarly, President Obama enacted a tariff on Chinese tires in a quest to promote fair trade. In the end, 1200 jobs were saved at a cost of $1.1 billion, or nearly $1 million per job.

In promoting steel tariffs, Trump never seems to cite any benefit achieved by his 30% tariffs on solar panels. Nor should we expect him to, for the tariffs offered little benefit. SunPower canceled a $20 million investment in an American factory, depriving the American people of hundreds of new jobs. Similarly, one projection estimates that the solar panel tariffs would cancel 23,000 installation jobs and billions of dollars in clean energy investment.

Even outside of hard evidence, Trump’s policy proposal is illogical. With a tariff placed on steel, the price of steel is raised. Since most steel-consuming industries import their raw materials, tariffs serve to increase their costs of manufacturing. In this sense, steel tariffs are likely to kill jobs from the very manufacturing industry that Trump is concerned about.

If the claim is that American industries cannot compete with foreign companies, it makes little sense to pass higher prices onto American consumers and American companies. Higher prices mean less demand, which in turn can lead to smaller profit margins. Combining this with higher manufacturing costs is a recipe for consumer despair and business collapse.