“Those who would give up essential Liberty, to purchase a little temporary Safety, deserve neither Liberty nor Safety.” This is a notorious quote by Benjamin Franklin, useful in many arguments advocating for liberty. Commonly, gun advocates use it to oppose gun control However, there are many other situations where this quote is appropriate. For example, it is also pertinent while advocating against government surveillance. Supposedly, surveillance is “purchasing” a little bit of temporary safety: a very small amount, in trade for our liberty.

A common argument in favor of government surveillance is that it supposedly protects us from terrorists. But according to Business Insider, since 9/11, only six Americans have died per year from Islamic terrorists, both foreign and domestic. The article also provides a handy chart comparing the probability of this to other causes of death. 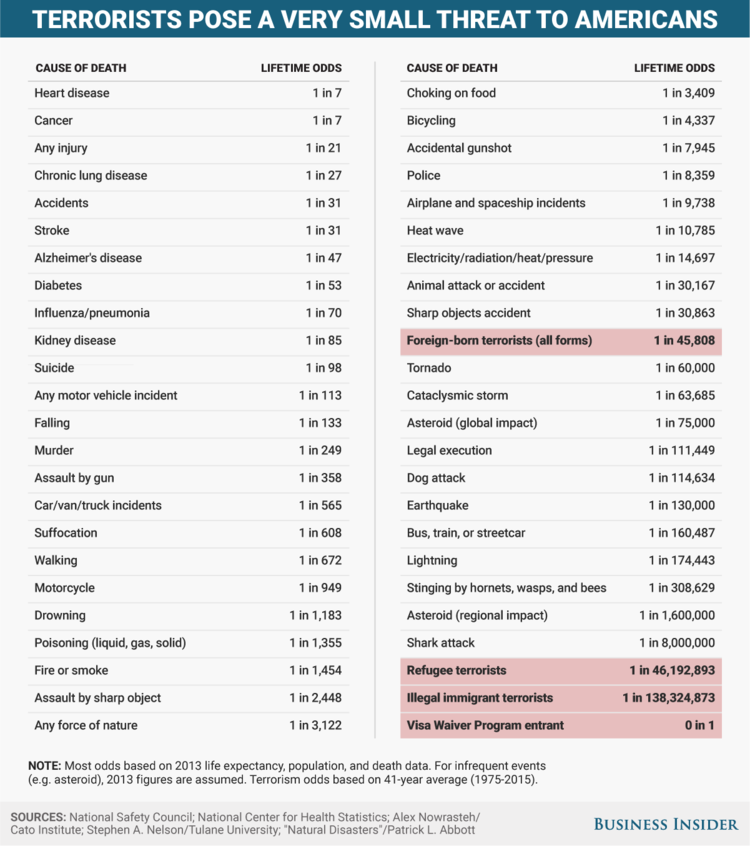 As you can see, there are many obscure causes of death that are far more probable. So no, this should not be a concern of the general public in the first place. In any other situation, such an insignificant number would be laughable.

While talking about the practicality of surveillance, even the UN has stated that it is essentially a show of gesture-politics, rather than result-oriented. Or in other words, the UN states that government surveillance is based more on symbolism and symbolic gestures rather than a good outcome. And as for the ‘results’ surveillance does come with:

“[The FBI general counsel] defined as useful those [leads] that made a substantive contribution to identifying a terrorist, or identifying a potential confidential informant. Just 1.2 percent of them fit that category.”

Thus, surveillance does not protect us from terrorists nearly as much as supporters would like you to believe. Yet, there are still some clear detriments that surveillance allows for.

For example, many oppressive regimes use mass surveillance on their citizens, much like in the U.S. In many cases, they claim to care for security and the good of the people. But some countries that practice this include North Korea, Saudi Arabia, and Cuba. Clearly, the good of the people can be a lie.

In the modern day, in fact, mass surveillance systems are quite popular among authoritarian regimes. Regardless of whether you would classify the U.S. as authoritarian, its government has certainly increased intervention in the lives of citizens. Surely, this in itself is a concerning realization.

Going beyond simple ineffectiveness and harmful effects, it is also worth examining the morals of government surveillance. Although we hear surveillance is for our own good, many Americans would disagree. In fact, 57% say it is wrong for the government to monitor its own citizens.

Funny. This quote sounds awfully familiar. It’s almost like it was propaganda for another authoritarian regime. Yes, that’s right: Nazi Minister Joseph Goebbels used the line to pacify Germans in 1933.

He is spot on with this quote; the ‘nothing to hide’ argument is deeply flawed.

Protecting your information from the government has a number of parallels. Would you want your private texts, emails and phone calls to be available to co-workers you don’t know? No, of course not. The majority of people would agree that this is an invasion of privacy.

Government action is hardly different. One of the only things dissimilar, in fact, is that the government can act upon what you do and say, potentially harming you for nonviolent action. This is far more dangerous. Obviously, many of us get weirded out when somebody leans over our shoulder to view our texts. This is what is happening in our government, but at mass levels.

You also do not need a reason to exercise a right in order for it to exist. For example, the 1st Amendment protects the right to assemble, even if you do not feel you need it. Perhaps you will never feel the need to assemble publicly. However, this does not give the state the right to take that ability away from you. The same goes for privacy. Whether or not you ‘need’ privacy is irrelevant: it is always wrong to take it away.

Our government is stripping our liberties, especially privacy. For what? Essentially nothing. If anything, government surveillance allows the state to take further control over our lives. Perhaps it’s time to get more serious about our right to privacy and take a stand.

71 Republic prides itself on distinctively independent journalism and editorials. Every dollar you give helps us grow our mission of providing reliable coverage. Please consider donating to our Patreon, which you can find here. Thank you very much for your support!