According to new federal data released Friday by the U.S Department of Commerce, the state of California is now the fifth largest economy in the world. With a GDP of $2.747 trillion, they surpassed the United Kingdom’s GDP, which is $2.625 trillion. What is even more outstanding is the massive population difference between the two, with the Golden State only having a population of 40 million to the UK’s 66 million. So how did a single state become fifth among a list of much larger countries? Two words: free market.

Although many see California as a sort of haven for liberal thinkers and progressive ideals (i.e UC Berkley), the economy of the state tells a much different story. California has seen the development of some of the most profitable and innovative companies and products the the world has ever seen. Among these are Apple, Intel, Chevron, Disney, Tesla, and Wells Fargo. These grand corporations and businesses were founded by entrepreneurial individuals and grown by the consumers to become some of the most recognizable brands in the world. They are surely the main constituents of California’s economic success.

The U.K on the other hand, has fallen from the economic graces. The productivity of the U.K, or the output the UK workforce per hour of work, has dropped drastically. This results in wage cuts, income cuts, and severely limiting the growth of the nation. Although the economy has shifted backwards, the foremost priority of the nation is to increase the number of social programs and the amount of public spending using money that the country simply doesn’t have, creating an ever-deepening deficit in their economy. 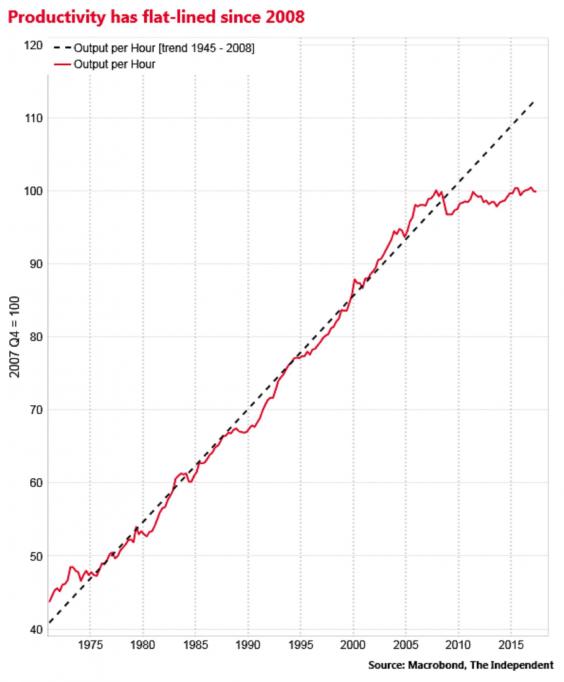 So what has caused the staunch dichotomy between these two economies? The simple answer is the free market. Now boasting its status as one of the most liberal minded countries in the world, the U.K has shifted itself into an increasingly socialized economy where social programs and “equality” are the primary focus. In fact, during the most recent general elections held in the U.K, the “Conservative” party, led by Theresa May,  vowed to return to what they considered to be “true conservative economics”. However, May stated,  “We do not believe in untrammeled free markets. We reject the cult of selfish individualism.” (read the full manifesto here). It is this rejection of laissez faire, free market capitalism that has cause them to forfeit their previous spot on the list and be replaced with the state of California.

Although California still rests under the mixed economy umbrella of the United States, it still remains one of the more free economies in the world and its future only looks brighter. Not only is California the top agricultural state in the country, but they are also the starting grounds for the legal cannabis industry in the U.S; a multi-billion dollar industry that has nowhere to go but up in the next few years. This, and its innumerable number of industries, businesses, and individual opportunities is what has made California’s economy soar above that of nations of greater size and will continue to carry them up the GDP chart.

The success of California over Britain proves one thing: the freer the market, the better the economy. The free market is the most tried and true way to economic growth. When the market is free, the people have the power to spend their money the way they want to and look out for themselves, preventing others from having to provide for them. It is this idea of economic freedom and individualism that the greatest innovations are birthed, the best standards of living are created, and the overall happiness of the people are improved. It would be wise for any nation to employ deregulation tactics and privatize everything in order to see mass growth, but until that happens, the parasitic ideal of collectivism will remain present in the minds of the people and governments everywhere.